At its best, a trade union is like an airbag. Being a trade union member empowers you and makes your voice heard. This is how social advisor Neleah Kagiri, who started working for JHL’s immigrant project, sums things up. 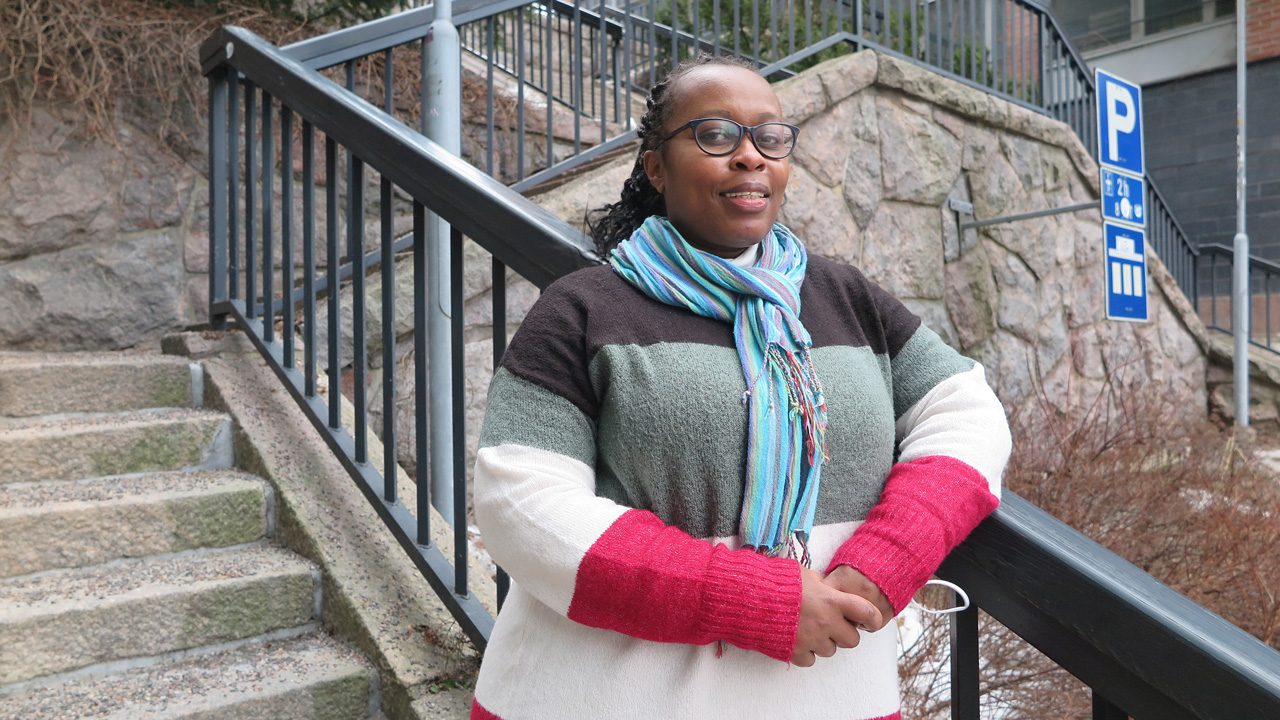 In spring 2008, Neleah Kagiri was walking along the Hakaniemi shoreline in Helsinki. On the wall of a high building, she spotted a mysterious combination of letters: JHL.

– I didn’t know all that much Finnish at the time, and I wasn’t familiar with the practicalities of working life. I stepped inside and asked if this is a trade union. When the answer was yes, I said that I want to join right now, Kagiri reminisces.

That was her first visit to JHL’s regional office. Since then, the regional offices of Helsinki Metropolitan Region and Southern Finland have joined forces. They are both located in JHL’s central office in Helsinki. Kagiri’s new workplace is located at the same address, because she started working for JHL’s immigrant project at the beginning of February.

Linda Savonen and Neleah Kagiri are in charge of JHL’s two-year immigrant project.

The project started a little over a year ago, and Kagiri is the co-worker of another project worker, Linda Savonen.

Savonen has a Master of Arts degree. Earlier, she was in charge of labour policy-related integration courses. She has also provided guidance for immigrants on a voluntary basis in civic organisations.

Open the doors, lower the threshold

The immigrant project’s goal is to get even more immigrants or those with an immigrant background who work in sectors covered by JHL to become organised and be covered by the union’s protection of interests.

– We want to get them involved in union activities. They are needed as actives in local branches and their Boards, Savonen says.

The network in Inner Finland is called Jalla-Jalla, and it has got together a couple of times in Tampere. The network in Ostrobothnia, JHL PoVer, was founded in December 2021 and it will start its operations this spring.

JHL already has two immigrant networks in operation: MeVe in Southwest Finland and KaMuT in the Helsinki Metropolitan Region.

– In addition, we have started to cooperate with the regional offices of Eastern Finland and Southeast Finland. By next summer, it can be that we will have two more new networks in operation, Savonen predicts.

Read more: JHL’s third immigrant network has been founded, it only needs a name:Sunitha Akurathi and Michaël Fandi hope that the network will give them encounters, peer support and information about working life

The networks draw up an action plan, select a chair from among the members and organise courses, meetings, leisure-time excursions and other activities. Each network has a named person in charge who works for a JHL regional office.

– We would like to get more information on Finnish employment legislation, employment contracts, and occupational safety and health, explains Galina Sillanpää who was selected as chair of JHL PoVer.

Galina Sillanpää was selected as chair of JHL PoVer. PoVer operates in Ostrobothnia.

She works within early childhood education and care as a children’s nurse in Alajärvi.

– Before graduating as a children’s nurse, I worked as a group assistant and personal assistant. At the beginning of my career I experienced bullying because of my language skills, but talking about the matter put a stop to it, she explains in good Finnish.

In recent years, JHL has also otherwise increased its services targeted to members with some other native language than Finnish or Swedish. They include an English-language education path that starts with a course named Union is Strength. The path continues with two continuation courses: Become an Active Member and How to Be or Become a Union Representative.

JHL has also increased its communications in English and other languages in order for the union to better reach those with an immigrant background who could be potential new members. In addition, JHL is involved in the campaign #IAmAntiracist, which is organised by the Ministry of Justice.

Hold on to all the good things from your native country and culture while being open and willing to adopt some customs of your new home country. This is the recipe that Neleah Kagiri followed when she moved from Kenya to Finland as an 18-year-old to study here.

– From my native country I’ve wanted to hold on to the many beautiful words of my grandmother. Same goes for Kenyan food, because food is really important.

Neleah Kagiri has lived in Finland longer than in her native country Kenya.

When Kagiri came to Finland, she started vocational school. However, soon after that she switched to a university of applied sciences and graduated as a social pedagogue in 2006. Nowadays, she is a Finnish citizen. She has lived in Finland longer than in her native country.

Before JHL, Kagiri worked almost nine years in MONIKA – Multicultural Women’s Association as a social advisor. MONIKA helps women with an immigrant background by aiming to improve their position and support their integration in Finnish society.

– I was for example involved in developing their integration centre where people can learn civic skills, study the Finnish language, and look for paths to working life.

Kagiri has several acquaintances with an immigrant background whose job-hunting has come to a halt because of their foreign name.

– I am an exception, because I myself have not encountered discrimination when looking for work. I am grateful to every employer who hired me that they gave me a chance.

However, Kagiri does have experience on prejudices and overcoming them. Especially at the beginning of her career, she was often the first employee with an immigrant background in a workplace.

– I wish that people would view an immigrant like any new employee, as an individual. As who they are, not as a representative of some group.

According to Kagiri, one should not at first ask about the person’s background, because if repeated, such a question may increase the feeling of being an outsider.

– When you’ve first become acquainted with a person, they can bring up their background in a natural way. That’s when it’s all right, she says.

– The union needs different kinds of voices for making decisions. They have a lot to say about matters related to working life, not just about immigration matters.

Most people in Finland associate the word ‘immigrant’ with asylum seekers who have come from the Middle East, or with Somalians. In reality, most of the people who have moved to Finland from abroad hail from Russia or Estonia. They have moved here because of work or marriage.

– Same goes for the members of JHL. Typically, a JHL member with some other native language than Finnish or Swedish hails from Russia or Estonia and works in cleaning services, Linda Savonen explains.

At the moment, JHL has approximately 5,700 members with some other native language than Finnish or Swedish.

– Finland is becoming increasingly multicultural, and the population is growing only thanks to immigration. Among immigrants, there is an increasing number of potential new union members, Savonen reminds.

Members with an immigrant background want the same things from their trade union as other members: Information about the rules of Finnish working life, and support for problems that they have encountered in working life.

An employer has abused an employee’s lack of information with groundless consecutive fixed-term employment relationships.

– There are some pretty harsh examples of how an employer has abused an employee’s lack of information with groundless consecutive fixed-term employment relationships or left the employee with no holiday pay, Savonen explains.

Neleah Kagiri on the other hand wishes that trade unions would use their influencing power so that zero-hour contracts would be prohibited by law.

– Those who come from outside the EU need a residence permit to work in Finland. The Finnish Immigration Service can only grant the permit if the applicant has regular income. A zero-hour contract guarantees nothing, which is why it is the worst alternative.

How fluent does an immigrant have to be in Finnish? Some think that immigrants’ language skills should be close to perfect, others feel that the significance of Finnish skills is emphasised too much. There are also those who think it’s enough if the immigrants know English.

According to Linda Savonen, if an immigrant gets by in Finnish, it is beneficial to the employee and the work community.

– It is a question of occupational safety and health. Everyone needs to have sufficient language skills for doing their job, so that they understand instructions and can take correct action.

The education path of JHL’s immigrant members starts with a course named Union is Strength.

According to Savonen, employers should take more responsibility for their employees’ Finnish comprehension. In addition, employment services and social services should increase their communications in plain language.

According to Galina Sillanpää, many immigrant members are unable to take part in the activities of their local branch or the trade union because of a language barrier or fear that their Finnish skills are not good enough.

– Increasing plain Finnish would help. I hope that JHL will also provide related training to us network leaders.

According to Neleah Kagiri, a trade union at its best is like an airbag.

– When you’re alone, your voice isn’t heard. Belonging to a trade union empowers you and makes you more aware of your rights and obligations.

JHL is aiming for a fair working life where employees have strong possibilities to make an impact on their working conditions. With these methods, one can succeed with the goal:

Have you always wanted to play in a band? Trade Union JHL’s new membership benefit includes a free trial period and discount on virtual music courses

Expected raises to allowances for travel expenses in 2023