How is it going for JHL members with a Russian background? Nataliia Sakhnova lives in Espoo and feels sad about the dreadful war. Olga Raassina, a citizen of two countries, keeps in touch with her parents in Sortavala, Russia. 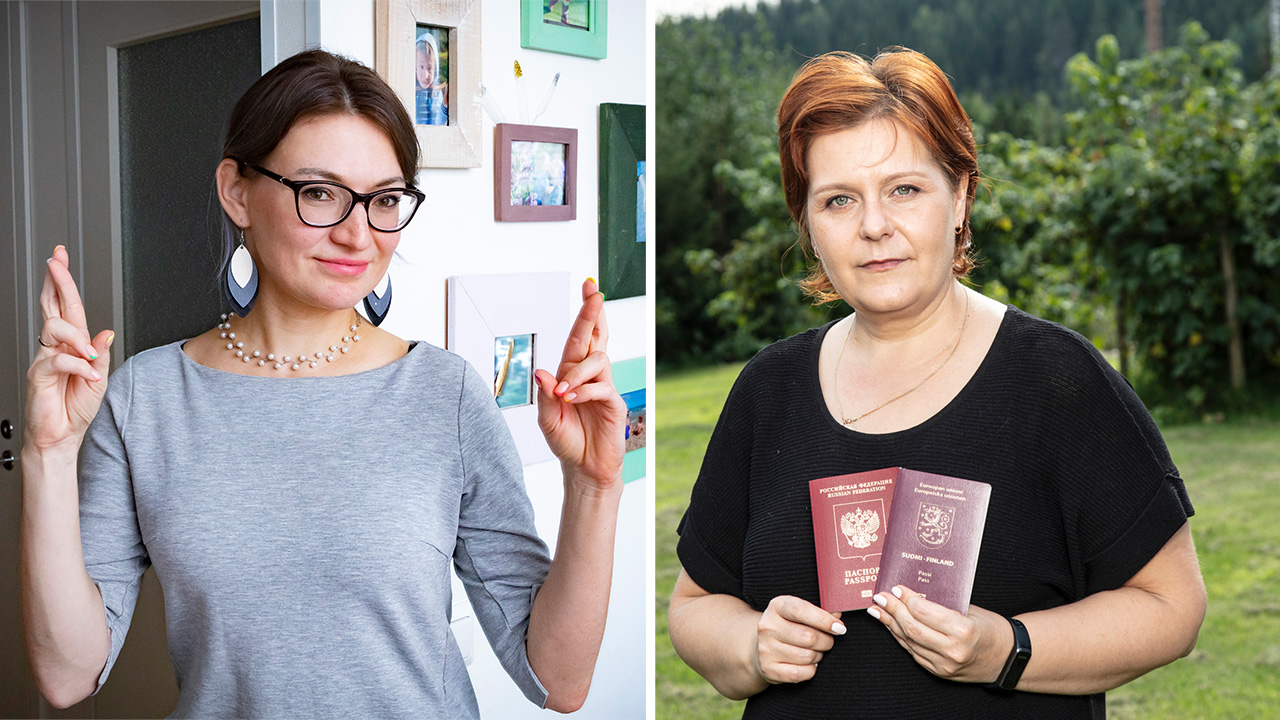 The best thing about Finland is safety. There is nothing to be afraid of here. These are the thoughts of JHL member and teaching assistant Nataliia Sakhnova, 37.

Nataliia and her husband Mikhail Sakhnov moved to Finland almost five years ago. The reason for moving is sitting next to Sakhnova. Kirill, the family’s 6-year-old son, is reading a Moomin book translated into Russian. 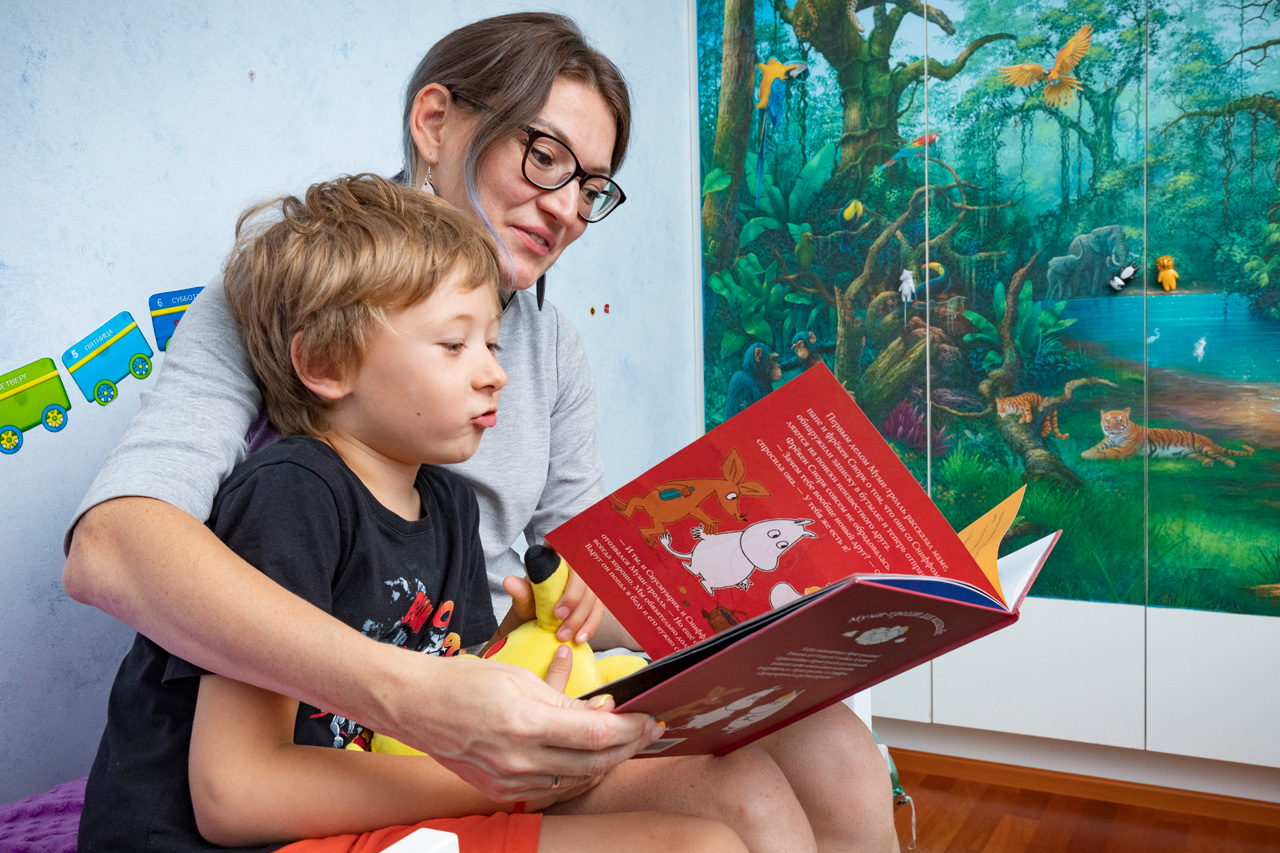 Kirill and Nataliia Sakhnova read about Moomintroll’s adventures in Russian.

– We wanted Kirill not to have to grow up in Russia. His future will be better elsewhere, Sakhnova says.

Sakhanova is a teacher by training. In Moscow, she worked as a music teacher and later as a deputy principal.

I was familiar with the Russian school system, and I didn’t want to put Kirill in a local school or day care centre.

– I was familiar with the Russian school system, and I didn’t want to put Kirill in a local school or day care centre. In Finland, children are allowed to be children longer than in Russia.

Life in the metropolis was otherwise stressful as well, and the entire country’s atmosphere felt distressing. The couple supported the opposition politician Alexei Navalny and participated in pro-Navalny demonstrations.

– Russia was already going downhill when we were living there. Now the situation is even worse, and it doesn’t appear to be getting any better in the future, Sakhnova says.

The family selected Finland as their new home country because of its closeness and familiarity. Nataliia Sakhnova’s brother had worked in Finland, and the whole family had visited the country several times.

Sakhnova was familiar with the Finnish school system’s good reputation, as well as the high-quality maternity care and healthcare of the country. The decision to leave was made easier by the fact that Mikhail Sakhnov, who works as an ICT expert, got a job in Finland.

When I came to Finland, I decided to adapt to the country and its customs.

Right after she had moved to Finland, Nataliia Sakhnova enrolled in integration training and started to study Finnish.

– When I came to Finland, I decided to adapt to the country and its customs. It’s only learning the language that still takes some work. In other respects, I’m more Finnish than Russian. 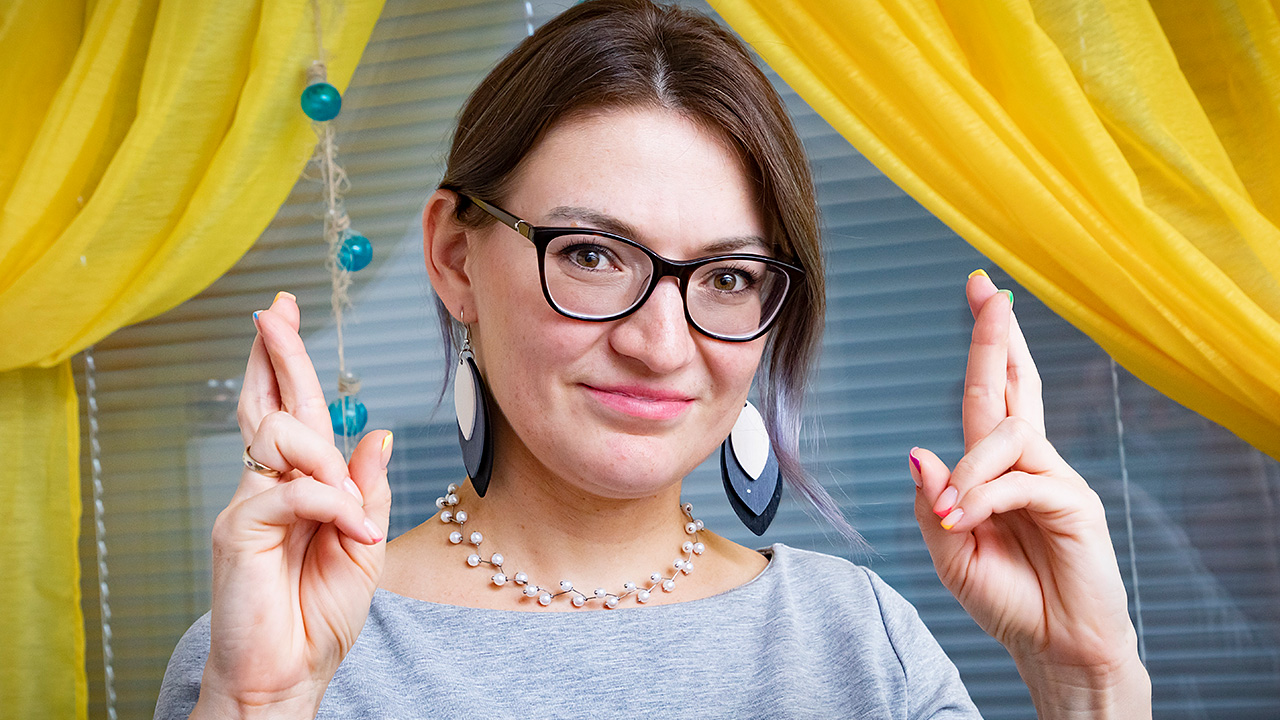 Nataliia Sakhnova has her fingers crossed, hoping that the whole family will get the Finnish citizenship.

The family lives in a two-storey terraced house in Matinkylä, Espoo. The home is like the home of any Finnish family with children. The only things that reveal the family’s Russian roots are Kirill’s Russian-language children’s books, the language spoken in their home and the wedding ring in Sakhnova’s right ring finger.

Nataliia Sakhnova thinks that the family’s future is in Finland. These are nerve-wracking times for her because her residence permit will expire next January.

– I’ve completed a language test and applied for Finnish citizenship for myself and Kirill. Mikhail will take his language test this autumn.

The aggressive war started by Russia in February has changed how Finnish people relate to Finnish-Russians. This was revealed by a survey conducted by the Seura magazine.

According to Cultura foundation’s representative Pekko Kohonen, attitudes towards Finnish-Russians have been somewhat negative already before, but negative attitudes have become more common this year.

As Kohonen describes it, people are more trigger happy.

– People may more quickly and without thinking blurt out something negative to Finnish-Russians or those who speak Russian. People think they have the right to say something more sternly than usual.

Any kind of racist behaviour and hate speech directly benefits the Russian embassy.

Cultura is an expert organisation focused on integration. They have the best knowledge on the situation of Russians and people of Russian origin. President Sauli Niinistö’s opinion on racist slurs towards Finnish-Russians is shared by the organisation.

– Any kind of racist behaviour and hate speech gives Russia a reason to claim that there is Russophobia in Finland and that people of Russian origin are being discriminated against, Kohonen warns.

At the beginning of September, Finland imposed stricter restrictions on granting visas to Russian tourists. In this world situation, Kohonen understands why travel for tourism is restricted.

According to Kohonen, entering the country on the basis of family ties, work, studies and humanitarian reasons should be allowed as before.

”I cried at home and at work”

Nataliia Sakhnova has not experienced prejudice or discrimination because of her origin. Unlike many people of Russian descent, she is not afraid to speak her native language when being out and about. 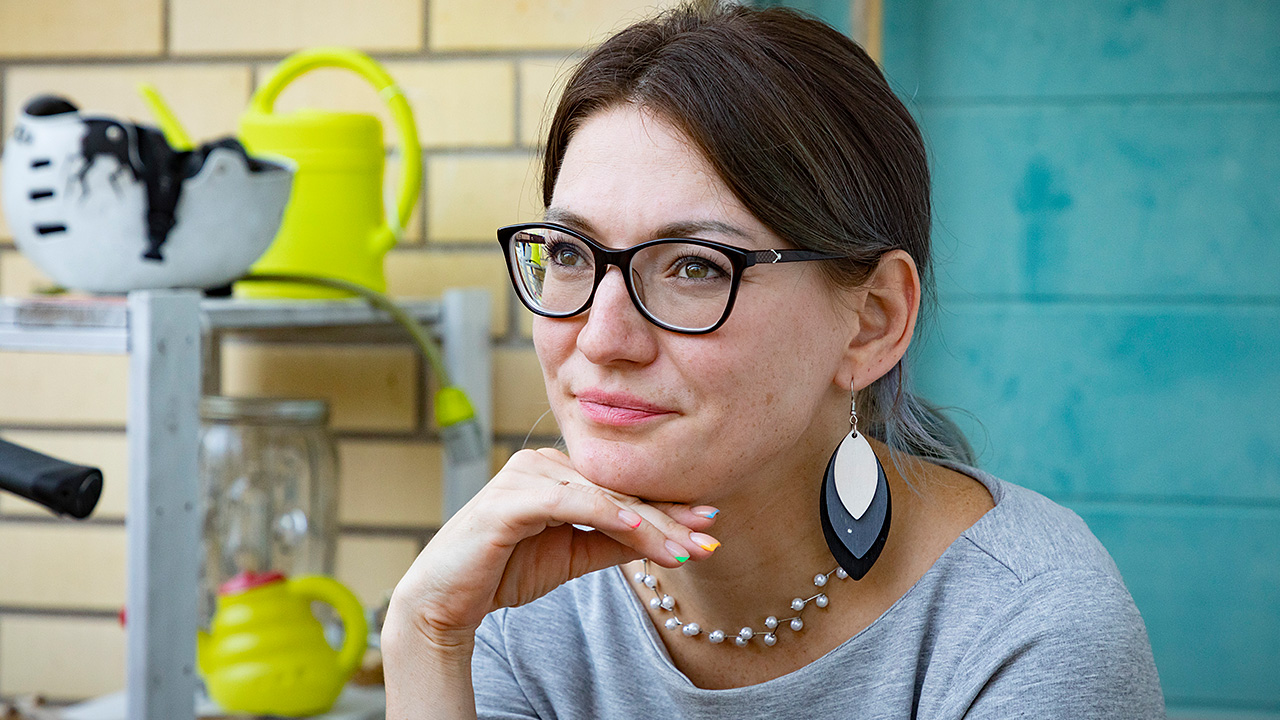 Nataliia Sakhnova is sad about the events in Ukraine and wants to help in any way she can.

The war has affected the family’s daily life otherwise, too. Mikhail Sakhnov was born in Ukraine, and his cousin was living in Kharkiv when Russia attacked Ukraine.

– When the war started, I was so wrought with worry. I cried at home and at work. I have wonderful co-workers who comforted me, Nataliia Sakhnova explains.

In March, her cousin and the cousin’s children made it to Finland and lived with the family for three months in Espoo.

– A three-room apartment was too small for six people. Luckily, a rental apartment was found for them. We still help them by paying half their rent.

The Sakhnova family has donated, say, clothes and shoes to Ukrainian refugees. In addition, the family participated in an anti-Russia demonstration at the end of February in Helsinki. 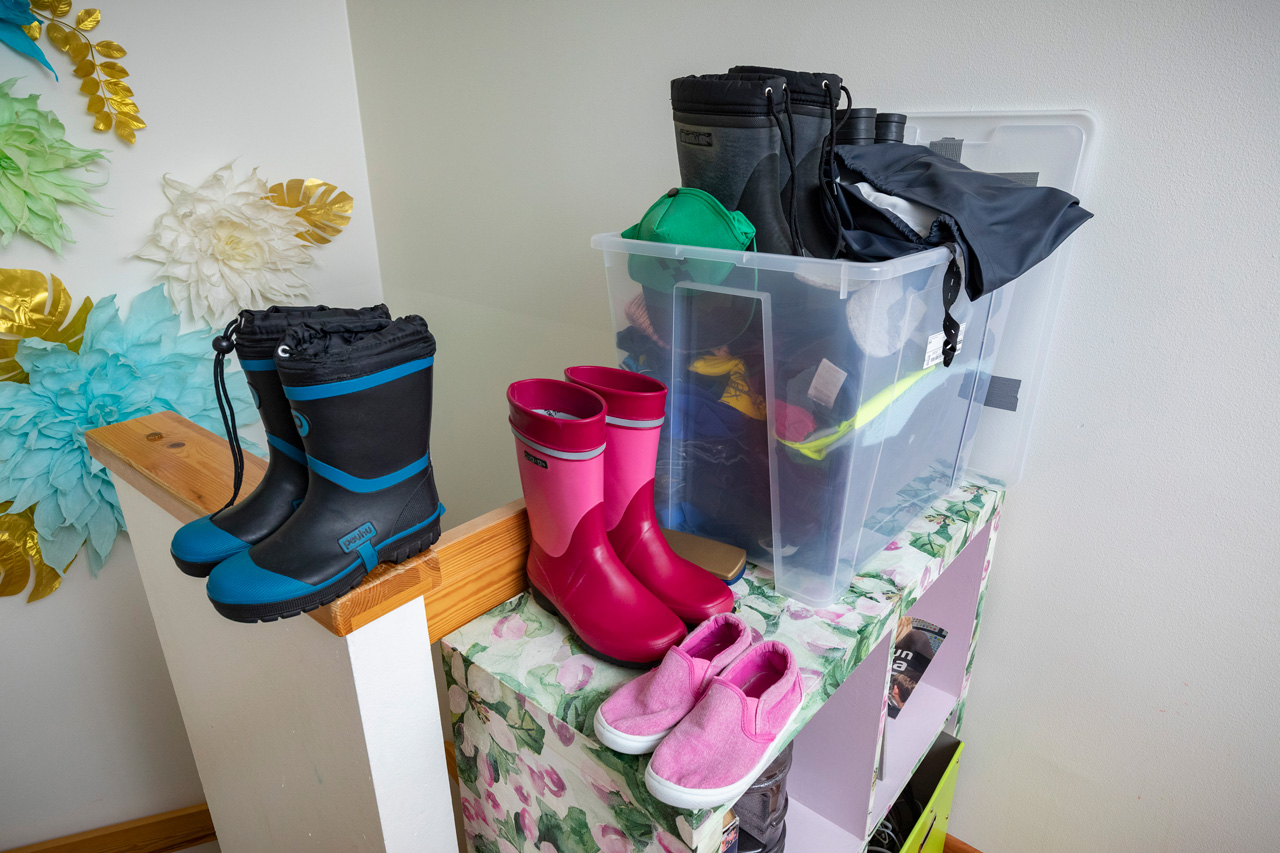 Nataliia Sakhnova has collected clothes and shoes that will be taken to those who have fleed Ukraine.

– Kirill was with me. I told him it’s wrong of Russia to bully Ukraine.

Sakhnova’s parents still live in Russia, as do her mother-in-law and some relatives and close friends. She keeps in touch with them by phone, but the war is not really a topic of conversation.

Sakhnova understands the desire of Finnish people to restrict granting visas to Russian tourists, thereby restricting their access to the country.

– The whole world will remember this war for a long time. President Putin is not supported by all Russians, but the war also puts a stigma on Russian people.

War tears in many directions

Teaching assistant Olga Raassina, 47, is an example of how Russia’s aggressive war tears a person in three directions. She was born in Donetsk in Eastern Ukraine, formerly a part of the Soviet Union. Since 2014, Russia and Ukraine have waged war on the ownership of the territory.

– My father is Ukrainian by birth, my mother is Russian. When I was 9, I moved with them to Sortavala in Karelia. 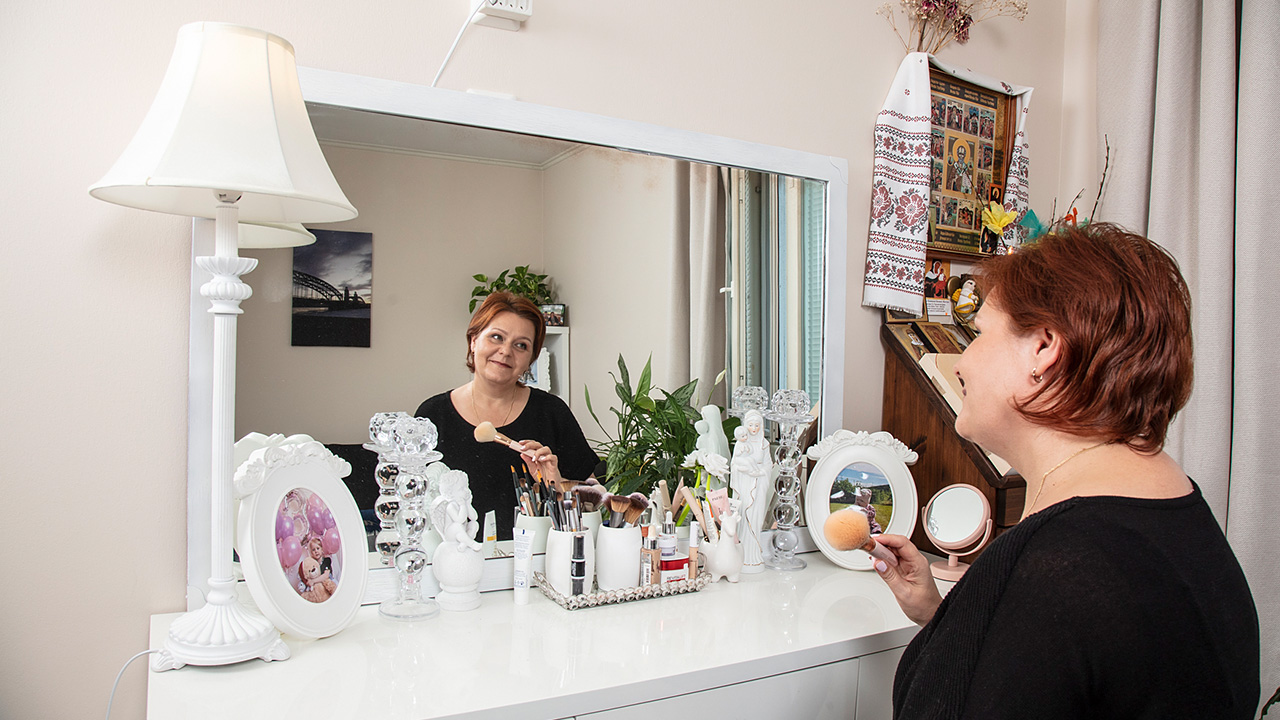 Teaching assistant Olga Raassina at home in Heinävaara village located in Kiihtelysvaara. Kiihtelysvaara is now a part of the city of Joensuu.

Raassina moved to Finland in 2004 after getting married to Jouni Raassina from Kiihtelysvaara. She now has both Finnish and Russian passport.

– I have people I care about in Finland, Russia and Ukraine. I feel conflicted because of the war. I can’t hate anyone, but I can’t pick sides either.

Love flared at the border

Olga’s love for Jouni flared at the border of Finland and Russia, where Olga worked as a border guard in the 90’s.

A Russian Army guard dating a Finnish man would not have gone over very well. It could have been a potential safety threat. Raassina then quit her job and worked at a local hotel and restaurant. 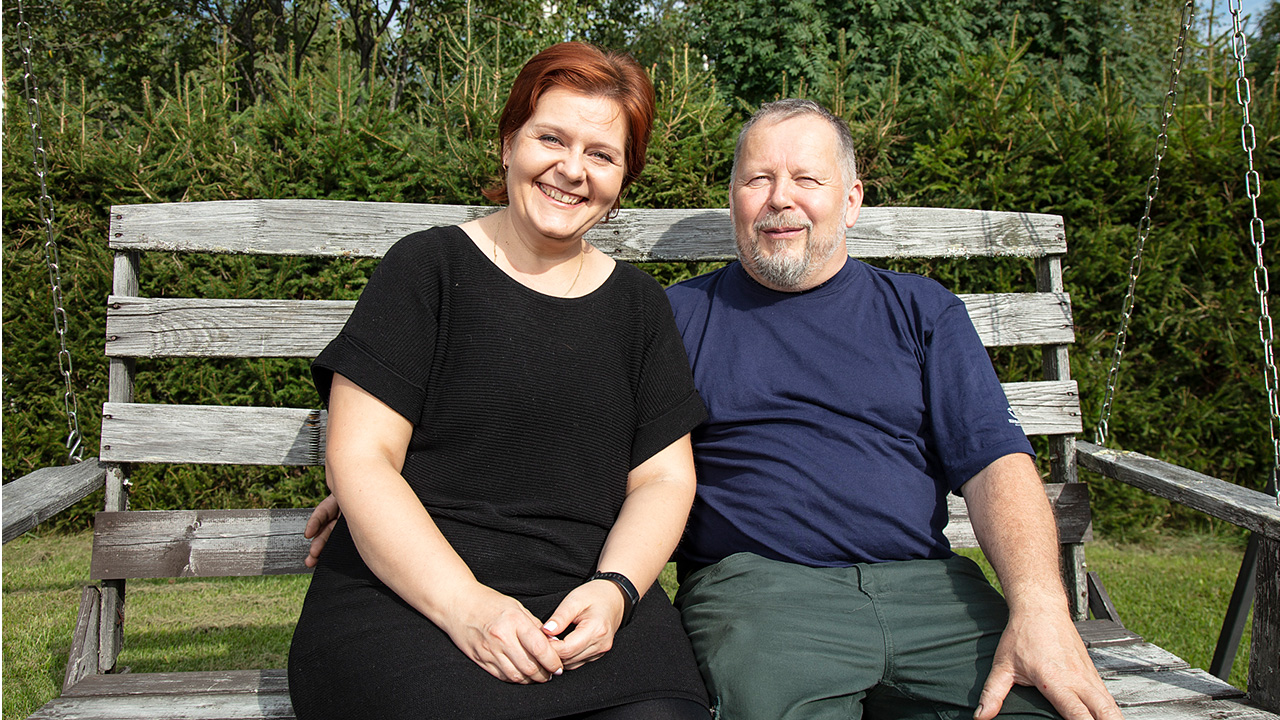 Olga and Jouni Raassina have been together for over 20 years.

They dated for three years until they got married and Olga moved to Jouni’s home in Kiihtelysvaara. With her came her children from a previous marriage, 10-year-old Darja and 7-year-old Pavel.

She still remembers the moving day well; it is stated in all the official documents: 16 August 2004.

Finnish with help of dictionary

The first six months in the new home country were difficult. Raassina didn’t speak the language, and she had no friends.

– I was the only Russian in the village of Heinävaara, which earned me some attention. As a mother, I was stressed out about how Darja and Pavel would adjust to their school and life in Finland.

At the beginning of the 21st century, there was no integration training, no language courses tailored for immigrants, no smart phones or Google Translator.

I crammed Finnish by myself with the help of a dictionary. It was tough.

– I crammed Finnish by myself with the help of a dictionary. It was tough, Raassina reminisces.

Her husband supported her however he could – he also encouraged her to become a trade union member when she started as a teaching assistant in Heinävaara school. 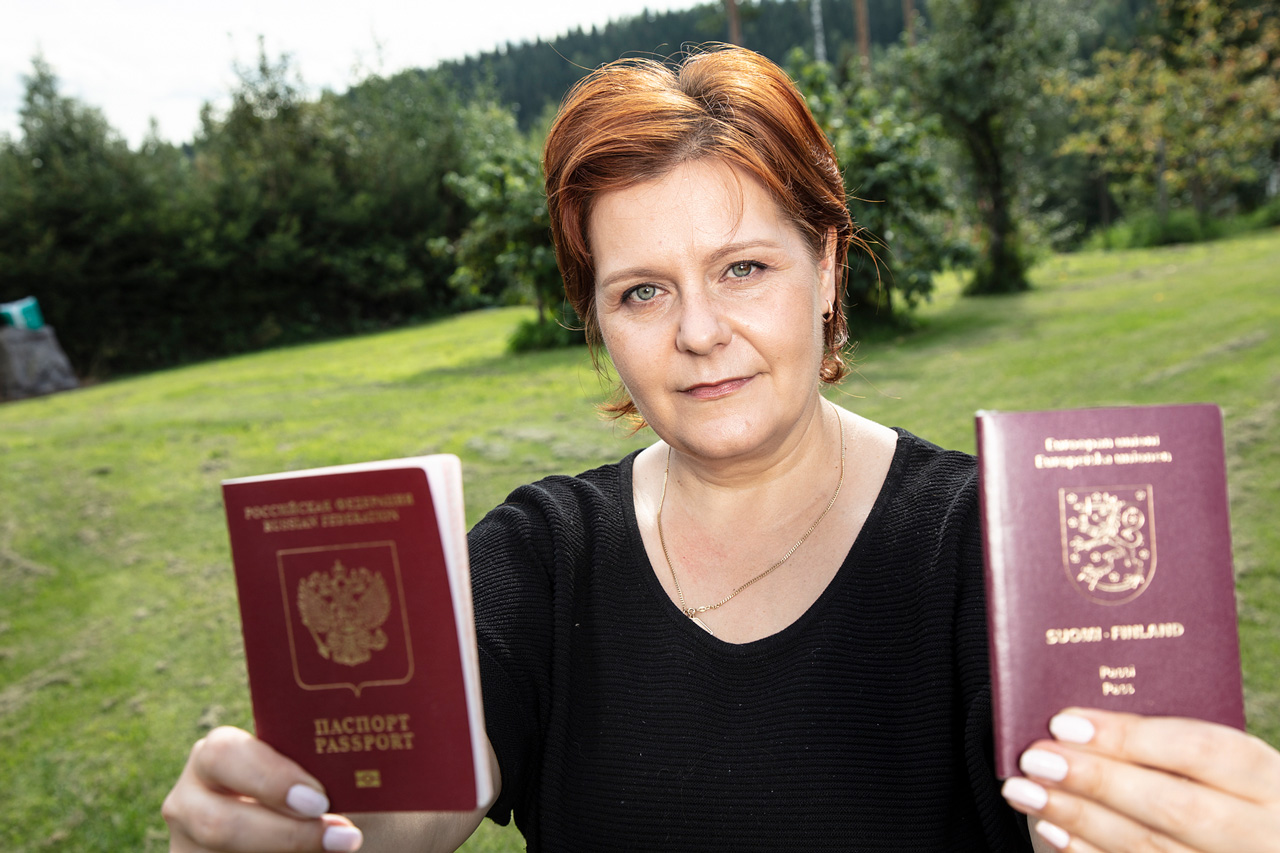 Olga Raassina is a citizen of both Russia and Finland.

During the first years, Raassina work in a group of pre-schoolers. The work was familiar for her. Before becoming a border guard, she had studied early childhood education and care and worked at a day care centre in Russia.

In Finland, Raassina completed a vocational degree within the sector, and she has worked as a primary school and middle school assistant. Nowadays, she also has no difficulties with the Finnish language.

– The children have also become independent; they live on their own. They are called Tarja and Paavo.

Olga Raassina is a devout Orthodox, and sometimes she guides groups in the new Valamo Monastery. She has also volunteered several times in the nun monastery of Lintula.

– For Easter, I make pashka and kulich at home. In addition, I paint icons. They are important to me. 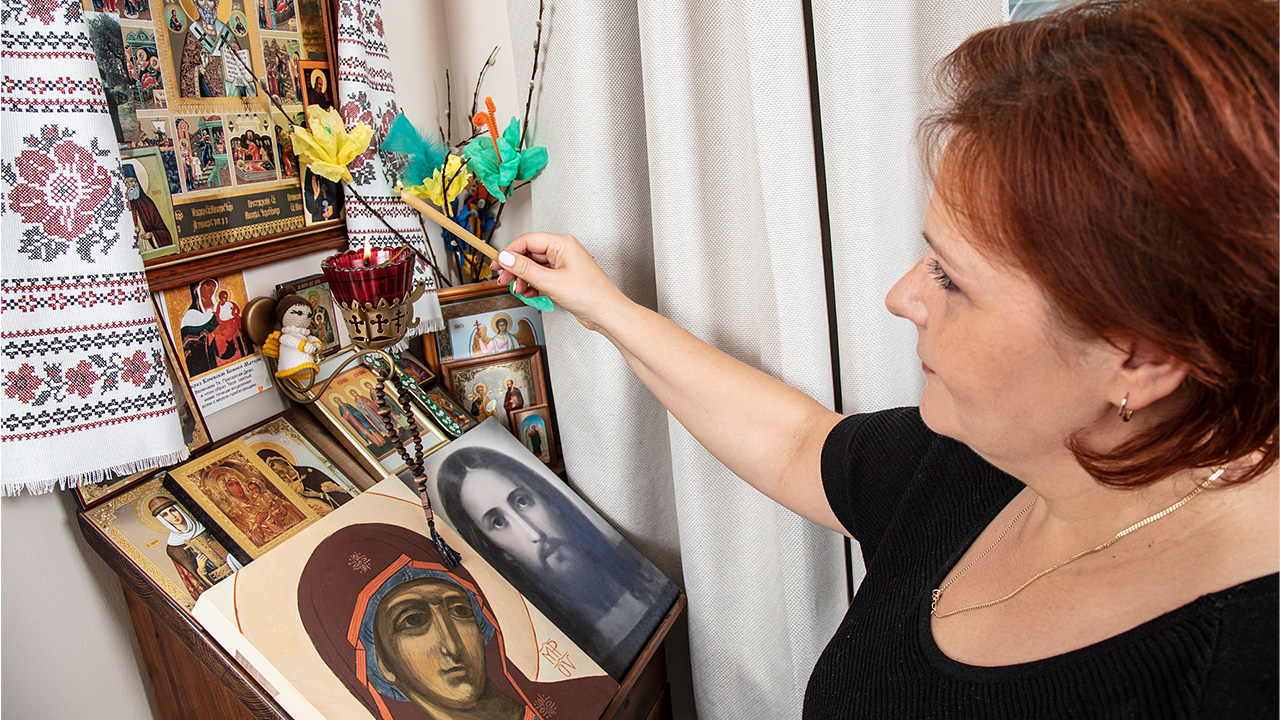 Olga Raassina is a devout Orthodox. She also paints icons.

According to Raassina, the Russian attack and the war in Ukraine have not affected how the villagers or others relate to her.

– Finnish people are wonderful. They know me here, and nobody has protested.

They know me here, and nobody has protested.

Raassina is in close contact with her elderly parents who still live in Sortavala.

– I’m responsible for them.

She visits them regularly, either alone or with her husband. That is one reason why she wants to hold on to her Finnish and Russian citizenship. The passports make it easier to take care of border formalities on both sides of the border.

Raassina has reservations about NATO membership

From the beginning of September, Finland has significantly restricted the number of tourist visas granted to Russians. Applications are accepted on one day of the week, and only in five visa centres. It is still comparatively easier to be granted a visa due to work, studies and family reasons.

Olga Raassina would not want Finland to make it more difficult for Russian tourists to enter the country.

– I understand that many people want to restrict the number of Russian tourists entering Finland, or to ban them entirely. However, ordinary Russians are unable to do anything about the war. Decisions are made on an upper level, and ordinary citizens have to suffer because of the situation.

– Finnish people think that joining NATO increases Finland’s safety. But does it really? Not necessarily, she ponders.