During January–June 2022, over 12,000 new members joined Trade Union JHL. This number is almost three times higher than the number of those who joined during last year’s first half. Eelis Näppi’s requests for his union are a firm attitude and good advice. 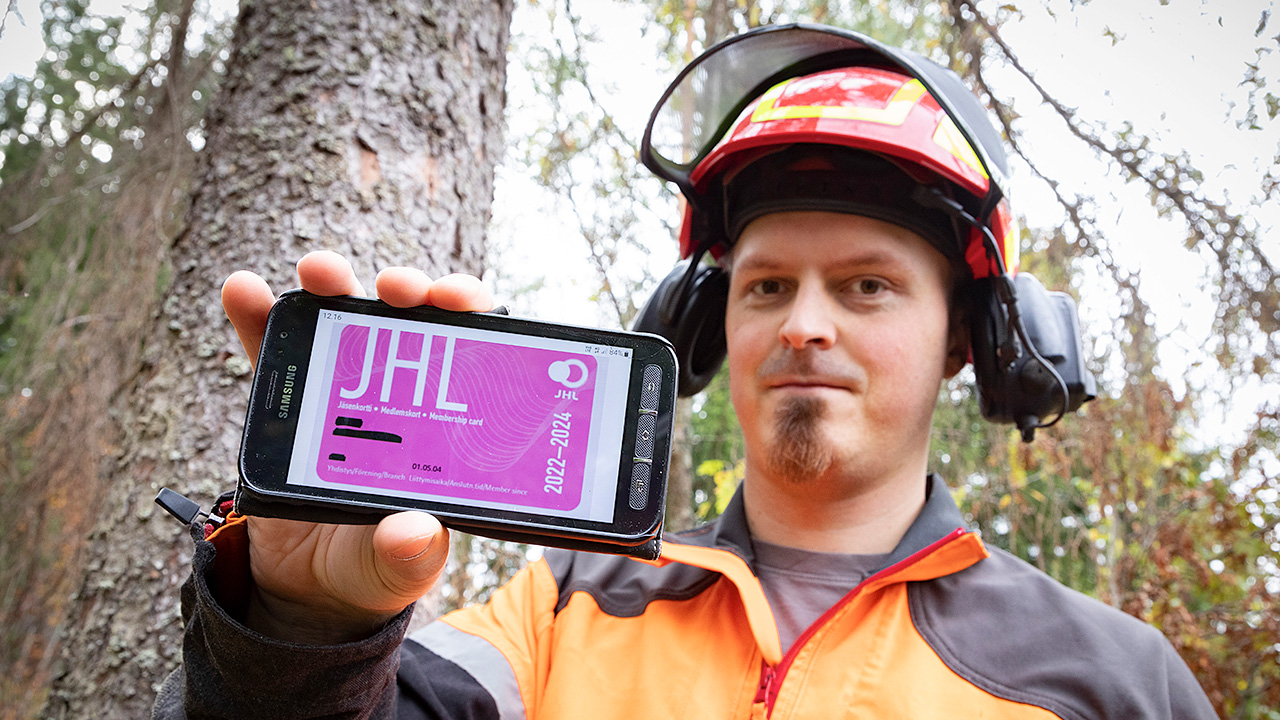 Eelis Jelmeri Näppi, 30, decided in April to join a trade union for the first time in his life. Näppi lives in Riihimäki and works for the City of Vantaa as a lumberman.

– Previously, I was an unemployment fund member only. I felt trade unions were too passive, he explains.

In mid-September, Näppi is operating a chainsaw in a residential area in Vantaa. He leans on a tree trunk and explains how he is in his element.

– I really enjoy my work most of the time, except during the darkness of winter, or when I’m wearing thick trousers in a 30-degree heat, Eelis Näppi says.

Näppi graduated as a lumberman in 2011, started his career in the region of Savo and continued for a few years in the service of a private woodlands company in the Helsinki Metropolitan Region. Since 2019, he’s been employed by the City of Vantaa.

Näppi belongs to a forestry unit in charge of managing the city’s forest property.

–  We are a tight group of four lumbermen, a tractor driver, a foreperson, and a chief.

I kept an eye on the spring’s collective agreement negotiations and decided it’s time to be awake.

When Toni Berndtson, an older co-worker,  recommended JHL, Näppi gave it a thought and filled in the membership form.

– I kept quite a close eye on the spring’s pay negotiations and JHL’s active role during them. I decided it’s now time to be awake.

– It’s a good thing to have even if your house is not on fire.

During the first half of 2022, a total of 12,005 new members joined JHL. According to director of organisational affairs Pertti Paajanen, there are several reasons for the exceptional surge of new members. He thinks one reason is the lowered union membership fee.

Since the beginning of the year, JHL’s membership fee has been exactly one per cent of earned income subject to tax. It includes the membership fees of the union and unemployment fund.

One reason for the increased number of members is the affordable membership fee.

– The number of joiners was also affected by a good and well-timed member recruitment campaign, the spring’s round of collective agreement negotiations and the union’s large amount of media publicity, he says.

JHL’s campaign, Someone will take care of it, has been a success. It has attracted a lot of views and a marketing communications prize.

Paajanen emphasises that the increased number of members has to do with the efforts of the union and its actives. It has resulted from organic growth and not from, say, a union fusion.

– It bodes well for the rest of the year and for the coming years, he says.

Majority is at prime-working age

The majority of those who have joined JHL this year are working people. There are 11,300 of them. The rest are students.

A good sign is that close to half are under 35 years of age, exactly 45 per cent. Approximately four per cent of the new members have an immigrant background.

About a third of the new members live and work in the Uusimaa region. Furthermore, hundreds of new members joined from Pirkanmaa, Southwest Finland, North Ostrobothnia, Central Finland, Satakunta, and Lapland.

The most common new-member occupations are children’s nurse within early childhood education and care, and practical nurse.

The biggest surge of members took place in April 2022. That’s when close to 5,000 new members joined JHL. Eelis Näppi is one of them.

In particular, Näppi expects that his union will provide help and advice in possible problematic situations because his employer is a large and faceless organisation, the fourth largest city in Finland.

Help and strength in numbers may come in handy, since Vantaa will switch its HR and salary payment system to Sarastia at the beginning of October. Because of a similar system switch, the salary payment of the City of Helsinki has been in a chaos since the beginning of April. Thousands of employees have been left without their salary, either partly or fully.

– This was one reason to get organised in a union, Näppi states.

Have you always wanted to play in a band? Trade Union JHL’s new membership benefit includes a free trial period and discount on virtual music courses

Expected raises to allowances for travel expenses in 2023